In the past when people thought about entrepreneurship, they usually thought about people who owned their own business and worked full time for themselves. This could have been daunting for people who wanted to have financial security and may have never known anyone who has been successful in owning their own business. In the age of social media though, entrepreneurship has taken on a whole new identity.

It is not uncommon to “see” entrepreneurs in a variety of fields. Just by logging into your account you can find people running their own businesses; some bigger and better than others but the exposure makes entrepreneurship seem like more of a viable option. The misconception that all entrepreneurs work full time for themselves has been shattered and this has encouraged more people to pursue entrepreneurship whether it is for fame, to become rich, or to make some extra money.

I had the opportunity to talk with Kelli, of “Kreate with Kelli,” to discuss her path to entrepreneurship. Kelli is an artist that turned her love of painting into a part-time business. She uses her free time and talent to host “Paint Parties” for groups of up to 40 people in which she teaches them to paint a portrait. While Kelli taught herself to paint when she was younger, she never really considered making that a career choice for herself. Kelli did not have any entrepreneurs in her family and it wasn’t until she created a mural for her son’s room that the potential for her to make money from painting became an option. 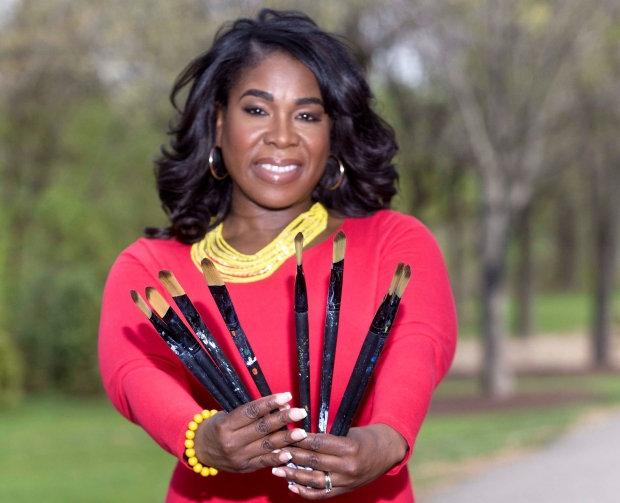 Kelli has been drawing since she was young. When her parents recognized that she enjoyed drawing, they bought her a sketch table. At around 10 years old she drew a “Tweety” bird on the back of her bedroom door; thinking her parents would not notice. She was wrong! To her surprise, she did not get into trouble and she continued to draw for personal pleasure. She even took a couple of arts classes in college, although she did not pursue her craft as a career choice.

It wasn’t until she was pregnant with her son that she felt the urge to do something different for his nursery, so she drew a mural for him. When her family and friends saw the mural they began encouraging her to draw for other people. Kelli was very nervous about drawing for others because it took a lot of time and she did not want to disappoint them. She did end up painting murals for a few clients but as she initially thought, it took up too much time.

In 2016, when the “Sip and Paint” parties became the thing to do for birthdays, girls night out, and other celebrations, Kelli’s friends once again encouraged her to share her talent with others. Kelli finally agreed and hosted her first party at a school. Next she hosted an adult party for her friend’s neighbor. There were about 16 people. Before each party she prayed, “Lord help this party go well.” And both parties were a success! From there, “Kreate with Kelli” was born.

Kelli found so much joy in hosting paint parties. Seeing the happiness that her clients exuded after realizing that they really could paint, boosts her confidence. She truly enjoys seeing her clients leaving a party feeling accomplished. This is what motivates her to continue expanding her business.

Although, balancing family time was an issue when Kelli first ventured into being an entrepreneur, this time she is able to balance it better. She tries to book paint parties two weekends a month and spend the other two weekends with her family. When her family doesn’t have plans, her husband encourages her to book more events and sometimes she takes her son or daughter with her. This allows them time to bond and she pays them to work as her assistant as well.

As stated above, Kelli did not set out to become an entrepreneur but by leaning into her discomfort she has created an opportunity for her to supplement her income, share her passion with others, and increase her confidence in her abilities.

If you are interested in hosting a paint party, feel free to contact Kelli. She is located in Maryland but will travel to you. Kelli will bring all of the supplies you and your guests need to paint and have a good time.
Kelli can be contacted at:
http://www.kreatewithkelli.com
Facebook: Kreate with Kelli
Instagram: @Kreatewithkelli